Scagliola is used to imitate the marble and hardstone inlay work known as Pietre Dure.  It was admired and valued from its first appearance in southern Germany in the 1580s, and quickly received the endorsement of royalty and the Catholic Church. The Dukes and Electors of Bavaria used it to considerable effect in the Munich Residence, drawing the interest of many of Europe’s rulers, including the Holy Roman Emperor.
During the 17th and 18th centuries it was used in several parts of northern Italy to make altar fronts [Photo 6].   Initially this work followed the example of late sixteenth century Roman and Florentine inlaid hardstone, using brightly coloured decorative and religious motifs, inlaid into a dense black background.  As the scagliolists became more accomplished, they developed techniques for producing pictorial work, which eventually took them beyond the scope of Pietre Dure.
Inlaid scagliola was also used to make decorative table tops, panels got display cabinets, and chimney pieces.  These became increasingly sophisticated, and found a ready market with wealthy aristocrats and collectors, notably the British Grand Tourists of the eighteenth century. There are many examples of secular scagliola in the palaces, stately homes and museums of Europe.  Antique scagliola table tops and chimney pieces are very collectable and frequently appear at auction.

Architectural scagliola is used to imitate marble for all forms of internal architecture: columns and pilasters, door casements and altar surrounds, chimney pieces, wall panels, and occasionally floors.  It is frequently used to make half-columns, pedestals and plinths for the display of sculpture.  The most flamboyant architectural scagliola is found in the eighteenth century churches of Southern Germany, but the material is equally at home in the aristocratic houses of Georgian and Regency England.  It can be seen in many of the public and semi-public buildings of the nineteenth century: museums and art galleries, town halls and theatres, hotels, libraries, banks and private clubs. From the end of the nineteenth century it was used in America in a similar range of buildings, including many State Capitols.
Although not load-bearing, scagliola is ideal for cladding structural elements in a building, and its comparative lightness allows it to be used in areas where stone and marble would be too heavy.  Its main limitations are two-fold: it cannot be used outdoors or in damp conditions; and because it is so labour-intensive, it is expensive – today often more so than marble, which has become highly industrialised at all stages of production.

The technique of scagliola

Scagliola is an imitation marble made from a paste of hardened gypsum plaster, water and pigments.  The addition of glue to the water slows down the setting process, allowing the paste to be sliced and pressed into moulds or beaten onto prepared surfaces such as walls and column cores.  Once the material has set hard, it is shaped and flattened using scrapers and abrasives.  Holes and hollows are filled and grouted with fresh scagliola mixes.  The surface is then polished using a series of progressively fine abrasives and re-grouting until a natural shine is achieved.  At this stage the material is often sealed with linseed oil and wax, to enhance the depth of colour and provide surface protection.
The number and choice of colours and the different consistencies at which the individual pastes are mixed and blended give the material its richness and figuring.  This has a major effect on how closely the end product matches a given marble. The ability to make good scagliola relies on the knowledge and experience of the workshop and the recipes it has built up over the years:  how a mix should be used (cast from moulds or applied directly to a background): the weight and balance of the figuring; how to overcome problems of scale; what will work best in a chosen situation, both technically and visually.
Equally important is the polishing process, which is labour-intensive and time-consuming.  One of the special qualities of scagliola is its natural shine, which is almost identical to that of polished marble.  To achieve an even, scratch-free finish takes considerable skill and care.
In the case of inlaid work, a flat slab of scagliola (or marble) is marked with a design and the areas to be inlaid are chased out and filled with the appropriate mixes; these can imitate marble and precious stones, or they can be used as individual colours to create ornamental and pictorial subjects.  The inlays are left high and allowed to set before they are levelled and polished.  The details of the design are built up through additional carving and filling operations, of which there may be many.  The process is painstaking and again experience plays a large part.

3. The origin of the word ‘scagliola’ and other terms in usage.

There is confusion about the origin and use of the term scagliola.  The word, (pronounced with a silent ‘g’), is Italian and derived from a word that was in use in the Middle Ages long before the arrival of artificial marble; ‘scagliaiuola’ was the name given in parts of central Italy to the mineral rock from which gypsum plaster was obtained.  It only subsequently became associated with the production of ‘scagliola’ artefacts.  The Florentine naturalist G. Targioni Tozzetti wrote in 1769:

‘[in addition to alabaster]…the majority of scagliola [i.e. the raw mineral rock] also comes from Spicchiaiuola [a town near Volterra], and is calcinated in Florence to make tables, altar fronts etc…[i]’ (my italics).

Tozzetti added that ‘scagliaiuola is none other than selenite’.  Selenite is a translucent form of gypsum found in abundance in the central and northern Apennines.   It has a laminated structure that allows it to be split into sheets.  The Romans used these sheets to make windows, a practice which continued into the Middle Ages in Bologna.  The name ‘scagliola’ was undoubtedly derived from the physical characteristics of selenite, which is brittle and breaks easily into flakes and chippings (scaglie in Italian).  Once calcinated, the material loses its translucency.
During the eighteenth century the word gradually came to be applied to imitation marble, though by no means exclusively.  There are several other Italian terms, many of them specific to different regions; these include meschia or mestura (mixture) from Modena and Florence, pasta di marmo (marble paste) from Naples, and pietra di luna (moon stone) – which again refers to the natural stone rather than to its product.[ii]
Twentieth and twenty-first century European art historians and commentators have tended to differentiate between architectural and inlaid scagliola, seeing only the latter as true scagliola.  In Germany, architectural forms of scagliola are called Kunstmarmor or Stuckmarmor (artificial or stucco marble), and inlaid work scagliola or Kunstmarmorintarsie (artificial marble inlay).   In France the same distinction is made, using stuc marbre, and scagliole or scaiole respectively.  Italians often use the expression finto marmo (artificial marble) to describe architectural scagliola.        In the English-speaking world, the term scagliola refers to both architectural and inlaid work.  In the nineteenth and twentieth centuries, ‘Bossi work’ was sometimes used to describe the practice of inlaying white marble table tops and chimney pieces with delicate neo-classical designs in coloured scagliola; many of these fashionable pieces were made by the Italian Pietro Bossi in Dublin at the end of the eighteenth century.

References: Dorothea Diemer, Hubert Gerhard und Carlo di Cesare del Palagio, Bronzeplastiker der Spätrenaissance – Berlin 2004.  Vol. I pp. 113-117.  The existence of Prince Wilhelm’s chapel, conclusively established by Dr. Diemer’s analysis of the contemporary documents, was unknown prior to the publication of her book.  Much of the information in this and the following two sections comes from the same source. 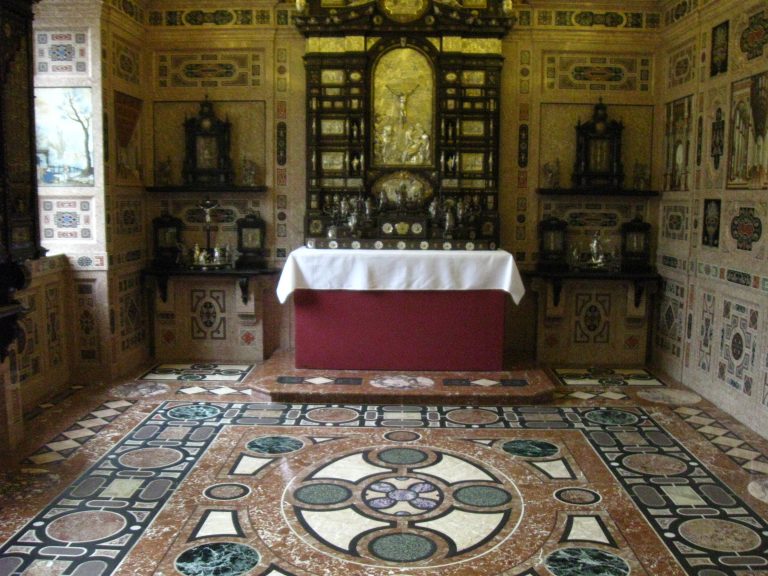 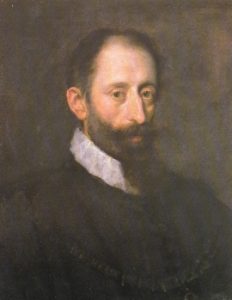